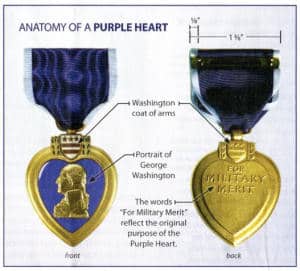 The National Purple Heart Hall of Honor commemorates the extraordinary sacrifices of America’s servicemen and servicewomen who were killed or wounded in combat. The mission of the Hall of Honor is to collect and preserve the stories of Purple Heart recipients from all branches of service and across generations to ensure that all recipients are represented. 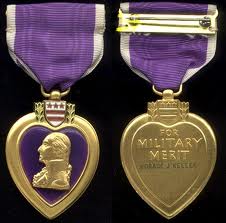 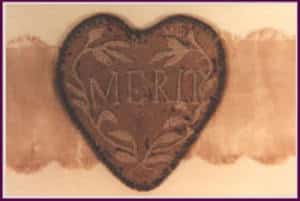 The Badge of Military Merit circa 1782

The award known as the Purple Heart has a history that reaches back to the waning days of the American Revolution. The Continental Congress had forbidden General George Washington from granting commissions and promotions in rank to recognize merit. Yet Washington wanted to honor merit, particularly among the enlisted soldiers. On August 7, 1782, his general orders established the Badge of Military Merit:

“… The General ever desirous to cherish virtuous ambition in his soldiers, as well as to foster and encourage every species of Military merit directs whenever any singularly meritorious action is performed, the author of it shall be permitted to wear on his facings, over his left breast, the figure of a heart in purple cloth or silk edged with narrow lace or binding.”

This award was open only to enlisted men and granted them the distinction of being permitted to pass all guards and sentinels as could commissioned-officers. The names of the recipients were to have been kept in a “Book of Merit” (which has never been recovered). At the present time there are three known recipients of the Badge of Military Merit: Sergeant Elijah Churchill, 2nd Continental Dragoons; Sergeant William Brown, 5th and Sergeant Daniel Bissel, 2nd Connecticut Continental Line Infantry.
Washington stated that the award was to be a permanent one, but once the Revolution ended, the Badge of Merit was all but forgotten until the 20th century.
General John J. “Blackjack” Pershing suggested a need for an award for merit in 1918, but it was not until 1932 that the Purple Heart was created in recognition of Washington’s ideals and for the bicentennial of his birth. General Order No.3 announced the establishment of the award:

“…By order of the President of the United States, the Purple Heart, established by General George Washington at Newburgh, August 7, 1782, during the War of the Revolution is hereby revived out of respect to his memory and military achievements.
By order of the Secretary of War:
Douglas MacArthur
General, Chief of Staff

On May 28, 1932, 138 World War I veterans were conferred their Purple Hearts at Temple Hill, in New Windsor, NY. Temple Hill was the site of the New Windsor Cantonment, which was the final encampment of the Continental Army in the winter of 1782-1783. Today, the National Purple Heart continues the tradition begun here in 1932, of honoring veterans who have earned the Purple Heart.
The Purple Heart has undergone many changes with respect to the criteria for being awarded. At first, the Purple Heart was exclusively awarded to Army and Army Air Corps personnel and could not be awarded posthumously to the next of kin. In 1942, President Franklin Roosevelt signed an executive order allowing the Navy to award the Purple Heart to Sailors, Marines, and Coast Guard personnel. Also in that year, the Purple Heart was made available for posthumous award to any member of the military killed on or after December 7, 1941.
Originally the Purple Heart was awarded for meritorious service. Being wounded was one portion of consideration for merit. With the creation of the Legion of Merit in 1942, the award of the Purple Heart for meritorious service became unnecessary and was therefore discontinued. The Purple Heart, per regulation is awarded in the name of the President of the United States to any member of the Armed Forces of the United States who, while serving under competent authority in any capacity with one of the U.S. Armed Services after April 5, 1917 has been wounded, killed, or has died after being wounded.

The National Purple Heart Hall of Honor offers visitors an incredible journey through military history and provides veterans with the opportunity to share their stories and reminders of human sacrifice and the cost of freedom. We invite you to visit our 7500 square foot facility in New York’s Hudson River Valley.

The Ceremonial Grounds, just outside of the main exhibit hall provide a contemplative space where visitors can reflect upon their experiences within the Hall of Honor. Purple Heart recipients can also choose to have their awards presented on these grounds.

Located downstairs, visitors will have the opportunity to view a specially created 15-minute dramatic documentary film entitled “For Military Merit: The Purple Heart”, telling the story of the Purple Heart.