Finding the trailhead:Take Orrs Mills Road (east) until it ends. Then take a right onto Route 32. Follow Route 32 for about 0.2 miles and then turn left onto Quaker Avenue, toward Cornwall. Make your next right on US 9W and head south 1.6 miles until you see a parking area large enough for several vehicles to the right. Begin at the gate; this is the trailhead. GPS: N41 25.216′ /W74 01.655′
THE HIKE
Across us 9W from Storm King State Park and bordered by the United States Military Academy to the south, Black Rock Forest stretches west, encompassing close to 4,000 acres of hills, ponds, meadows, and swampland. And although its role as a scientific research station dates to the late 1920s, Black Rock’s connection to the history of New York State can be traced back to the American Revolution, when George Washington’s army used Continental Road to travel from West Point to Newburgh and watched the river for British warships from Spy Rock. This might seem surprising given Spy Rock’s inland location, but at 1,461 feet, it is actually the highest point in the Highlands region.
Briefly owned by Harvard University (Dr. Ernest Stillman’s alma mater), this forest is now managed by a consortium of public and private institutions and protects several reservoirs that supply water to the nearby towns of Cornwall and Highland Falls. When Dr. Stillman designated the land as a research forest in 1928, it was only beginning to return to health after 200 years of damaging human activity. Nevertheless, because Storm King, Black Rock’s neighbor to the east, tends to attract most of the hikers that venture up to this part
of Orange County today, the likelihood that a visit to this sanctuary will involve running into more than a few fellow outdoors enthusiasts is relatively small.
Pointing like an arrow toward the Science Center and Forest Lodge, that sit just inside the eastern border of Black Rock, this mid-length lollipop, described in a counterclockwise direction, begins by following Idlewild Creek for approximately 0.5 mile. From here (next to a water filtration plant), the white blazes of
the Black Rock Hollow Trail lead steadily uphill over the moss-covered gneiss and granite that litter dry streambeds. This trail segment runs into the yellow Stillman Trail after 1.3 miles, and a right turn (northeast) leads up to the forest’s namesake Black Rock. A shelf at 1,400 feet offers views of Frog Hill, Schunemunk, and in the distance, Stewart International Airport’s runway. The unmistakable sound of artillery fire and machine gun strafing from the firing ranges at West Point can be clearly heard above the tree line.
Climb down the other side of this dark geologic mass, cross Hulse Road and Continental Road in short succession, and then continue west on the Stillman Trail, weaving around scarlet oaks, red maples, black walnuts, and green ash trees. At mile 2.5, turn left (southeast) on the White Oak Trail, cross Sutherland Road, and skirt around the shore of Sphagnum Pond, where brilliant purple bull thistle flowers bloom in late summer. Haifa mile later, the white blazes lead to the right (south), down Continental Road. In the opposite direction stands an enormous white oak, while farther down the gravel road stands the Chatfield Stone House, the oldest building in the forest.
Navigate around the north end of Arthurs Pond (which may require fording after heavy rains) and head downhill once more, through a boulder field, until you meet White Oak Road again, curving in from the north. Stay on the road, and after passing the Aleck Meadow Reservoir on your left, look for the Stillman Trail (yellow). Follow the Stillman Trail around and eventually over the top of the intimidatingly named Mount Misery. Black Rock dominates the skyline from the summit. Note that the climb on both sides is strenuous, and in some places, the trail is badly eroded. Cross White Oak Road for the final time, watching for the Reservoir Trail’s blue blazes on the left (northwest). This last part of the route runs along the foot of Honey Hill, crosses the waterway leading to the Upper Reservoir via Ben’s Bridge, and terminates at the water filtration plant and the Black Rock Hollow Trail, which you took into the forest from US 9W. 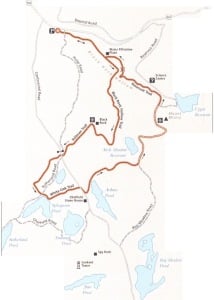 MILES AND DIRECTIONS
0.0          Start from the gate on US 9W, walking southeast on the gravel woods road alongside Idlewild Creek.
0.1          A kiosk displays a map of Black Rock Forest and lists emergency contact telephone numbers. Pass Hulse Road on the right.
0.5          Approach a water filtration plant to the left of the trail. Turn right (south) in the direction of the white blazes.
1.3          Turn right (west) onto the Stillman Trail/Highlands Trail, marked with a yellow blaze and a teal diamond. Follow this path to the summit of Black Rock.
1.7          Arrive at the top of Black Rock. Admire the view to the west and take a few minutes to catch your breath and replenish lost calories with a granola bar or a piece of fruit.
2.1          Turn left (south) onto Hulse Road, make an immediate right onto Continental Road, and then turn left again to                                      stay with the Stillman Trail. You will pass two gates in the process.
2.5          At the cairn, turn left (southeast) onto the White Oak Trail, cross Sutherland Road (gravel), and walk past Sphagnum Pond. A trail appears to head northeast alongside a swampy area, but stay close to the pond for a few hundred feet and watch for white blazes.
3.0          Turn right (south) on Continental Road and then take the next left down another woods road that leads to Arthurs Pond.
3.3          At the junction with the yellow Tower View Trail on the east side of the pond, turn left at the top of a small slope and stick to the White Oak Trail. After 0.2 mile, follow a seam of granite downhill into a field of boulders.
3.7          The white blazes end. Turn right (east) onto the gravel White Oak Road and stay with it for 0.4 mile, passing Meadow Road and then the blue-blazed Swamp Trail on the right.
4.1          Rejoin the Stillman Trail by turning right (east) and follow it up the steep flank of Mount Misery.
4.5          From the top of the hill, gaze across the forest to Black Rock, your first climb of the day. Take a water break and prepare for the descent back to the trailhead.
4.7          Turn left (northwest) onto the Reservoir Trail (blue).
5.2          Cross over Ben’s Bridge, continue for another 0.3 mile, and then circle around the water filtration plant. Pick up the white-blazed Black Rock Hollow Trail and follow it back to the start of the hike.
6.0          Arrive back at the parking area on US 9W.
Options: The network of maintained trails and woods roads in Black Rock allows for a great deal of customization. Hikers who crave more climbing can explore the southern ledges by taking the white Scenic Trail from the Upper Reservoir area. In addition, individuals looking to add a few more miles, as well as a refreshing dip, should stay on the Stillman Trail past the White Oak Trail junction. It eventually intersects with Sutherland Road, from which the swimming pond of the same name can be accessed.
Local information: Orange County Tourism, 124 Main St., Goshen, NY 10924;
(845) 615-3860; www.orangetourism.org
41.3946886-74.0241367