The Trestle Trail is a mere 1.5 miles from the Caldwell House!!! 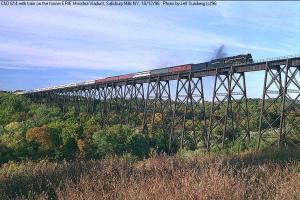 Serving as a scenic backdrop for the sculpture placed around the property of the Storm King Art Center, Schunnemunk Mountain cuts a striking figure in the Hudson Highlands, rising as it does to an imposing height of almost 1,700 feet. Schunnemunk is, in fact, tall enough to be seen from most places in Orange County. Relatively new as parks go-New York State only officially acquired the property in 2003-this long land formation is characterized by its double crest. The two ridges on either side of Baby Brook are actually a geological downfold, rather than a dramatic feature like a gorge or a canyon.
Making Schunnemunk even more interesting is the puddingstone conglomerate visible in the higher elevations. A reddish-purple in color, this cap rock is speckled with white quartz and pink sandstone millions of years old. To study the geology up close and to appreciate the grandeur of this mountain, spend a long afternoon among the ancient megaliths, twisted pines, and the swampy lowland between the two ridges. Discoveries await within the boundaries of the park, none more welcome perhaps, than a bit of solitude.
Seen from afar, this mountain thrusts its wide shoulders out in a challenge to day hikers, daring them to try to reach the top. Climbing the northern slope, half a mile into the Trestle Trail, unprepared visitors may be having second thoughts. Fortunately, the packed soil path levels off (temporarily) and a single bench presents the weary with a chance for a rest and a view. Thick grass chokes the trail in places from this spot on, as the white blazes guide you to a second overlook where the sunbaked shelf of rock is splotched with gray-green lichen.
The red-blazed Barton Swamp Trail picks up where the Trestle Trail leaves off, carrying you up and over a weather-worn hump of rock in a counterclockwise direction and intersecting with the Long Path. This long-distance trail can be traced south all the way to Fort Lee, New Jersey, but only about 1.5 miles of it overlap with this particular route. Undulating over the exposed stone on top of the narrow western ridge, the Long Path provides several views and then, just before mile 3, it meets a crossover trail.
Choosing your steps carefully, descend into the valley and then climb a series of switchbacks up the other, steeper side. Although short, this might be the most arduous part of the hike. The clatter of dry stones cascading behind will chase you up the cliff. Now on the eastern ridge, you’ll stay with the Jessup Trail for approximately 2 miles, to where it dives down into Taylor Hollow and runs into the Barton Swamp Trail. Until then the yellow blazes (painted on the stone at boot level in many places) keep you in the open. And at the highest point on this ramble across Schunnemunk, the former site of a fire tower, your elevation will be 610 feet above the observation deck of the Empire State Building.
Duck under the branches of the jack pines that cloak the eastern ridge in a thick green mantle, and pick your way over the varied topography that makes the Highlands such an ideal destination for city dwellers in search of some fresh air and exercise. The yellow blazes curve east at Taylor Hollow, mirroring the course of Baby Brook. To return to the Trestle Trail and close the loop, ford the brook and make a final scramble up the red-blazed trail. Then retrace your steps to the trailhead. 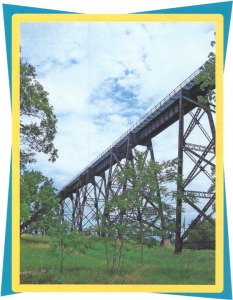 0.0      Start just west of the viaduct, where white blazes leading from the parking lot on Otterkill Road lead south and uphill. Turn right to stay on the white- blazed Trestle Trail after climbing about 450 feet.
0.5     After a fairly relentless 0.5 mile, steadily gaining roughly 500 feet in elevation, you’ll reach a tiny spur leading to an overlook with a wooden bench. Look down on the viaduct and Salisbury Mills with the knowledge that you’ll be twice as high above these landmarks later in the day.
1.2     Reach a second clearing with views to the east toward Storm King and the Hudson.
1.4     The TrestleTrail ends where it meets the Barton Swamp Trail. Follow the red blazes right (west) over a hump of bare rock and then turn left (south) on the Long Path.
1.7    From a third viewpoint, gaze down on Woodcock Hill and Clove Road. On a clear, sunny afternoon it‘s possible to make out the Shawangunk Mountains to the northwest, their deeper blue outline barely discernible against the sky.
2.2      At 1,440 feet, you now have a near 360-degree view of Orange County, an impressive vantage point that encourages lingering. Continue south on the ridgeline in the direction of the aqua blazes.
2.9     Turn left (southeast) on the blue-blazed Western Ridge Trail and proceed slowly down the bumpy, uneven puddingstone. You’ll briefly join the red Barton Swamp Trail in the valley, but then return to blue blazes up a nearly vertical section where you‘ll need your hands free to pull yourself over the wall of rock.
3.3     Make a left (north) turn on the yellow Jessup Trail, which is also blazed with the Highland Trail‘s teal diamond. Much of the next mile will be above the trees.
3.5     Stop on the spot where an old fire tower once stood, 1,670 feet above sea level. On a sunny afternoon there‘s no better place for a lunch break, but if the day is cool or overcast, you may want to seek shelter from the wind. To see the megaliths, turn left (west) at the white blazes painted on the stone and walk for slightly less than 0.2 mile.
4.0     Drop below 1,600 feet and keep left at the junction to remain on the Jessup Trail. Just past this intersection is another outstanding view to the east.
4.6     Meet the Sweet Clover Trail, which runs across the park to Taylor Road in the east. Keep following the yellow blazes north.
5.2     Yet another view will delay hikers who aren‘t relying on public transportation for the return trip to New York.
5.5      Proceed straight on the Jessup Trail (northwest) through the four-way trail intersection, cross Baby Brook, and climb back up the western ridge on the red Barton Swamp Trail.
5.7      Veer to the right to reconnect with the Trestle Trail. Let the white blazes
guide you back downhill to the viaduct.
7.1      Arrive back at the trailhead on Otterkill Road.
Options: Add another mile or more to this hike by remaining on the Long Path until it crosses the Jessup Trail (rather than using the blue connector trail), or follow the Dark Hollow Trail (black blazes) to the Otterkill Trail (red blazes) on the return trip. 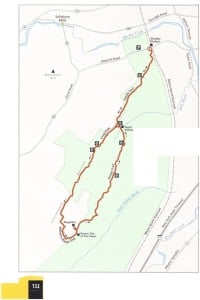