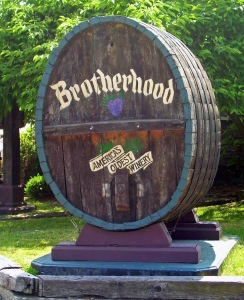 We would like to extend a special thanks to the folks at Brotherhood Winery for helping us to pick out the wines for out Open House today. Since today is all about inviting relatives, friends, and neighborbors into the B&B, we thought it would be only fitting to serve our closet neighboring winery’s selections to our guest.
Among the wines we will be serving are: Brotherhood’s Pinot Noir, Merlot, Cabernet Sauvignon, Zinfandel, White Zinfandel, Chardonnay, Riesling, Dry Riesling, Ice Wine, New York Tawny Port, the Special Holiday Spice Wine, and more. So, come on by – today – Sunday 12/11/11, starting at 1pm and have a glass or 2 of some fantastic local wine!
History of Brotherhood Winery:
In 1810, a French Huguenot émigré named Jean Jacques purchased land in New York’s bucolic Hudson Valley and began planting grapes. By 1837, Mr. Jacques needed more land, so he purchased a plot in the quiet village of Washingtonville, NY, and planted another vineyard. By 1839, his first underground cellars were dug and Mr. Jacques fermented his first wine vintage. Those cellars, the oldest and largest in America, are still in use today at Brotherhood Winery.
The Jacques family made wine at the Washingtonville facility for almost 60 years, selling much of it to Jesse and Edward Emerson, two New York City wine merchants. The Emersons, Finger Lakes vintners themselves, understood the high quality of Mr. Jacques’ wine and used it to improve a blend of wine from an organization called The Brotherhood of New Life – an experiment in utopian communal living in the Hudson Valley. When the Emerson family took control of the Washingtonville winery, they renamed it Brotherhood, a name that it still proudly bears today.
The Emerson family operated Brotherhood until Prohibition. In 1921, Louis Farrell purchased the winery and its large stock of sacramental wine. He sold wine for religious ceremonies throughout Prohibition, which was finally repealed in 1933. It has been noted that the clergy population in the area grew substantially during this period.
Louis and his wife were the first to grasp the value of Brotherhood’s location, as the nearest winery to New York City. They began conducting tours of the winery, highlighting the now-enlarged underground cellars, the history of the facility and its picturesque site. In fact, the Farrell family initiated the very concept of wine tourism, hosting parties and events at the winery that drew hundreds of thousands of fans annually, and introduced the Brotherhood brand to generations of American drinkers.
A partnership of businessmen purchased the winery in 1987, including a prominent winemaker from Chile, Mr. Cesar Baeza. Baeza, internationally recognized as a master blender, wine educator and winery consultant, set about creating premium New York varietal wines and converting Brotherhood into a premier destination in NY State.
After a disastrous fire in 1999, Brotherhood’s fortunes suffered until 2005, when Mr. Baeza formed a new partnership with two winemaking families from Chile. The Castro and Chadwick families have deep roots in the famous winegrowing areas of the Maule Valley, near San Clemente, where they farm hundreds of acres of Vinifera grapes, along with other fruit.
The new Board of Directors has embarked on a massive restoration and renovation program at Brotherhood that includes equipment upgrades, vineyard acquisitions, the planting of new vines, and a facility remodeling, highlighting the partners’ commitment to improving quality.