At least once a week, we are treated to the sight of Bald Eagles circling overhead at the Caldwell House Bed & Breakfast….

Bald Eagles of the Hudson River 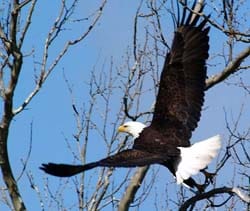 The same elements that support breeding pairs – clean air and water, ample food supply, large undisturbed stands of trees – also attract bald eagles looking for a winter home.
Perhaps surprisingly, the Hudson River region still provides tracts of relatively undisturbed land for roosting, perching and nesting. Some of these tracts have been purchased by New York State to protect bald eagles. These habitats are especially attractive during winter, when human activity is limited.
Each year, bald eagles migrate from their northern nesting areas to New York’s rivers and reservoirs in search of open water, food and roosting sites. Even during the coldest months, open water can be found near power plants that discharge water during energy production, or where the natural flows of tributaries enter the river. In recent winters, more than 100 wintering eagles have been counted along the lower Hudson.
In 1997, a nesting pair produced the first eagle born along the Hudson River in more than 100 years. In 2005, 12 pairs nested and 18 eaglets were fledged along the river.
In recent years, the stretch of the Hudson from Kingston to Croton has been increasingly popular with bald eagles, probably because sections of the river are kept open by discharges from power plants, and railroad tracks provide an ample supply of dead animals (carrion) for scavenging eagles. 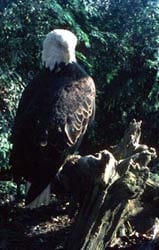 Bald eagles prefer wooded
areas near water, with tall
trees for nesting and perching
Popular Eagle Viewing Areas Along the Hudson
Some popular spots for viewing eagles along the Hudson River are:

Cooperators in the Hudson River Bald Eagle Program include: